If you’re a business that relies on having parcels delivered or collected daily, whether locally or further afield then you will need a Courier Company. Maybe you work in a retail shop in the city centre, perhaps a warehouse on a trading estate, offices by the riverside or you work from home in a little village then a Courier Company is essential.

The United Kingdom’s Road network haulage and parcel delivery companies had to use A and B roads until the introduction of the motorways which first appeared in 1958 as a part of the Preston bypass.   This changed the face of motoring and haulage in the UK, the bypass later became a part of the M6 and developed into the network of motorways that now stretch across the country.

If you are in London the M25 encircles the perimeter and at a length of approximately 117 miles long gives parcel delivery companies the chance to deliver items from dungarees in Dartford to swimming shorts in Slough without having to go through the centre of London.

Planning the delivery routes can take a lot of work and organisation, making sure as much as possible the parcels get delivered on time.  If the courier was picking up bottles from Slough and then delivering watches in Windsor, he would probably check on any roadworks or possible delays. The courier’s experience could play a big part and local knowledge of the area and the street layout would make a huge difference to the delivery times.

Couriers are also knowledgeable when it comes to what the right procedures are on the road and what things mean – for example, they usually have a good knowledge of road regulations, and what things like Chapter 8 Chevrons like these vehiclechevrons.com would use them.

The motorway system now spreads in all directions of the compass, for example the M4, starting in Cardiff (the capital city in Wales) the motorway heads east and goes across the Severn Bridge into England, skirting past several big towns and cities, Bristol, Bath, Swindon and Reading before ending its journey in London. Then there’s the M1 which winds its way up the country giving an easy route for couriers to travel from the south of the country to the north. Before the introduction of the motorways the traffic would have to take long winding roads adding time and fuel costs on to delivery schedules. 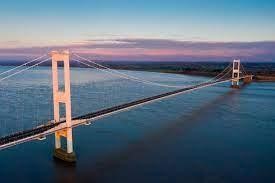 The United Kingdom is made up of islands, so the busy seaports have container ships coming in and out twenty-four hours a day with supplies and luxury goods that need to be delivered to their intended destinations. The motorway links that have been built up over the years have made it much easier to transport perishable items from ports like Southampton in the south of England, which has the M3 taking you back towards London and the M25.  To Dover in the southeast of England with the M20 which leads back to the motorway network where you can go then go anywhere in the country. The northeast has Liverpool with the M6 going up to Carlisle or heading south to Birmingham and joining the M5 which then will take you all the way to Exeter in Devon. The motorways are a complicated network of roads that criss-cross the country from top to bottom making the work of a courier much quicker and more efficient.

How To Tell If Your Bike Has ABS