Many empires from History are built on a variety of factors. In the ancient world, the military ability and the application of science to its development created the biggest and most potent Empires and Civilisations. However, this was not the case with Venice. For the first time, commerce and trade enabled the Venetians to spread out around the Mediterranean and the Adriatic Sea.  Its position close to the near and Middle East meant that it became the trading hub for Europe. These goods and services were to bring massive revenue to Europe, and the first point of contact and income was Venice. 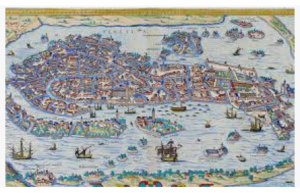 The spice trade was the key. The aristocratic dynasties of Germany, France, England, and Spain all demanded the East’s flavours and tastes. Venices position in Northern Italy offered its protection as it became a powerful city-state. The land trade and Venices natural port lagoon were perfect for offloading the goods from various trade routes. The city itself came from Roman refugees fleeing the pillages of Attila the Hun. The refugees hid in a swampy and boggy area where the Huns mounted Tarkan warriors could not enter and were less effective as a fighting force. Happy to escape with their very lives, they began to build the beginnings of the city. The name literally means “We’ve got this far”.

It was to be a wise move. It became an established port and was the one information and trade point for the Eastern Roman Empire, Byzantium. This half of the Empire continued to exist and thrive after the collapse of the Western Roman Empire and its descent into the various Kingdoms afterwards.  The capital of Constantinople needed to have a European based partner, and Venice was to be it. To the North, the Holy Roman Empire offered even more trade. Venice became, for want of a better word, the middle man between two early medieval Superpowers, enabling it to become a Superpower itself.  These trade routes were so dominant that European states like Portugal and Spain tried to find a different way to the East. This desire was to inspire the European discovery, albeit it inadvertently, of the Americas.

The economic advances that the Venetians created still affect us today. They made a series of smaller businesses and companies underneath some large, powerful monopolies. This style of financial control was to form the basis for the breaking of feudalism and set the groundwork for Capitalism as we know it today. Even modern-day accounting practices of profit and loss, like that by an Accountants Swindon based company such as Chippendale and Clark accountants Swindon are born here with the studies of  Luca Pacioli. His observations and improvements to Venetian merchants create the techniques that we still use today.

How to Achieve Seamless Customer Onboarding With Automation

Jubin4 weeks ago2 weeks ago 0

How to organise your items in self-storage

How to Ensure Your Branding is Consistent