The more humans have learned about science, the more myths have been dispelled. When palaeontology took off in the 1800s, all of a sudden, the thought of giant dinosaurs roaming the earth really came into the public consciousness like never before and followed centuries of monster sightings and folklore. Could it be possible that as these giants once existed, they could still lurk in the unexplored depths of our oceans?

We know more about the moon than we do about what’s in our deepest seas. Here we explore some legendary mythical sea creatures:

One of the most popular sea myths is that of the Kraken. Thought to be a colossal octopus, it allegedly terrorised ships off the coast of Norway and Iceland. It was said that its tentacles could reach the top of a ship’s mast, pulling into down into the dark depths. If the Kraken didn’t get you with its tentacles, the funnel it left as it descended could suck a boat down like being flushed down a drain!

Some seafarers have put the Kraken at over a mile wide, but others believe it to be, not an octopus but a giant squid. The biggest known squid in the world can grow to up to 45 feet but is usually only found in Antarctic waters. There are confirmed reports of giant squid attacking ships and they are more aggressive than octopi, so could this be the real Kraken? If you love sea stories and can’t get enough of the ocean why not invest in an Animal Sculpture. Sculptures from Gill Parker come in all shapes and sizes so you are bound to find something you love. 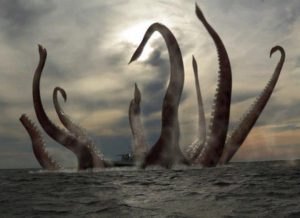 Another mysterious creature of the deep is the sea serpent, said to have attacked ships in the same manner as the Kraken. However, most sea serpent sightings have been from a distance, with people seeing a snake-like shape, possibly with a reptilian head and followed by a series of humps. They are a popular theme in mythology, appearing in Norse and Greek mythology and as the Leviathan in the Bible.

Everyone loves to try and spot a plesiosaur-like monster called Nessie, probably the most famous mythical creature in the world. Many sightings have reported seeing humps of a submerged body with a long neck and small head protruding above the water line. Scientific studies have dispelled the possibility as pure myth unfortunately. Reasons for supposed sightings include basking sharks, debris, oarfish and even whales. 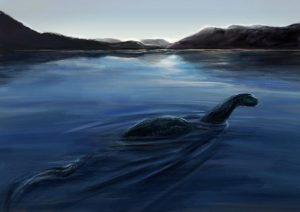 A whole class of sea creature belongs to the half-fish half-human breed, normally in the guise of a Mermaid or Merman. Although mermaids are often depicted as kind creatures, especially by Disney, in the past they were represented as mean and malevolent. Whether she innocently forgets that men can’t breathe under water or she intentionally drowns them, the mermaid seems to serve as a warning for being attracted to beautiful women.

Similar to the mermaid myth is that of the Greek Sirens. The three sirens were said to control men with their songs and bring them to a destructive end. They have been represented as bird-women, but far more classical references have them as aquatic in origin.